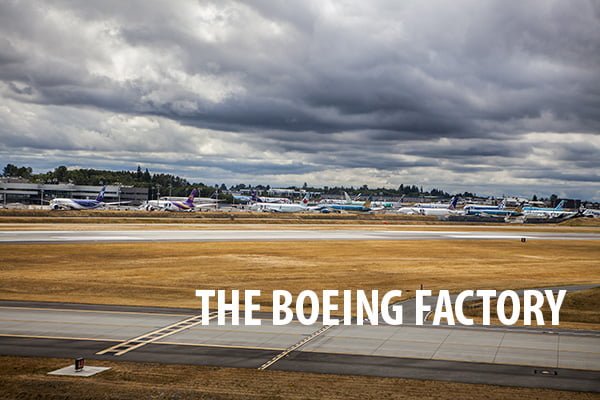 Okay, so we weren’t allowed to take pictures inside the actual factory, but if you just google “Boeing Factory” you’ll see a tonne of pictures in the search results that show you the assembly lines inside the factory.

We really enjoyed our time at the factory, it was really cool seeing everything that goes into making airplanes.

Here are 7 fun facts that we learnt!

1. The Boeing factory is the largest building in the world!

2. Around 30% of the business that Boeing does is for defence planes

4. The Boeing 747 was so expensive in production that it almost drove the company into bankruptcy

6. In the early days, the factory was so big that it formed it’s own weather system inside; and clouds actually formed inside the building. This was rectified once an air circulation system was installed

7. There are 2.33 miles or 3.7 kilometers of pedestrian  tunnels running below the factory.