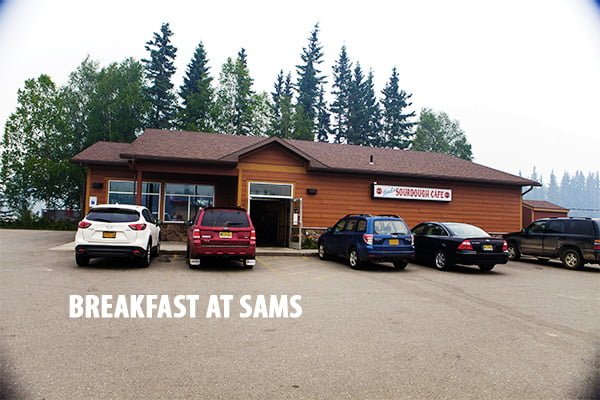 So we decided that, after the hot springs, we wanted to drive up to Dead Horse in Alaska. Dead Horse is one of the most northern points you can drive to. So off we went.

We were about 3, maybe 4 hours into the drive when the car troubles started. I’m no car expert, but what happened was that our Universal Joint broke. Ladies, thats the thing that makes the wheels go round and round. I think. Anyway, we couldn’t drive the car, and we are LITERALLY in the middle of nowhere.

Oh, did I mention that there were over 600 fires in Alaska at the time of this? We could see the smoke everywhere.

oh and we had no cell service. The joy.

We wrote down our insurance information on a piece of paper and flagged a car down, praying that they would call someone.

Drikus & my dad figured that they could put the car in 4WD to enable the front two wheels and he could drive that way.

So Drikus left me and my dad in the middle of nowhere to try and drive back to Fairbanks to get some help.

We waited, a few cars drove past. We waited more. The smoke started to roll over our heads. It started raining ash on us.

It was hot too! We actually had to put sunblock on! In Alaska!

Thank God we have Solar Panels (although, we can’t run the air conditioning) It was cooler outside rather than inside.

I cooked dinner, and we watched some Big Bang Theory.

At about 11pm Drikus came back! In a rental car! Hurrah!

So his version of the story was that he got about an hour out and then the car broke down. BUT it broke down right in front of one of the fires, and there were fireman who gave him a lift to the top of a hill where he could get some signal. He called triple A and they came and towed him to Fairbanks. He only got there at like 6pm. The store was closed. But he had called the guy and said he would leave his car and keys in the parking lot so that when they get in the morning they could have a look at it.

He then got an Uber to the airport. Rented a car. And drove ALLLLL the way back to us.

We slept in the next day, it’s not like we had anything better to do. Then we all got in the rental car. It was a bet unnerving leaving the RV all alone in the middle of nowhere. What if a fire came? What if someone broke into it? Okay, the latter was probably unlikey, but we’re from South Africa so you can’t fault us for thinking these things.

We drove to Fairbanks, and got cell service and guess what….

THEY MANAGED TO FIX THE CAR!!! woooo!

Before we picked it up, we decided that we deserved a good meal. We found Sam’s Sourdough Cafe and ate brunch there. Chilli bowls all around.

Then we picked up the truck, and drove back to the RV, hitched up, and had to turn around.

Here are our happy faces at Brunch!